Home » My Articles » The Myth of Multitasking

The Myth of Multitasking 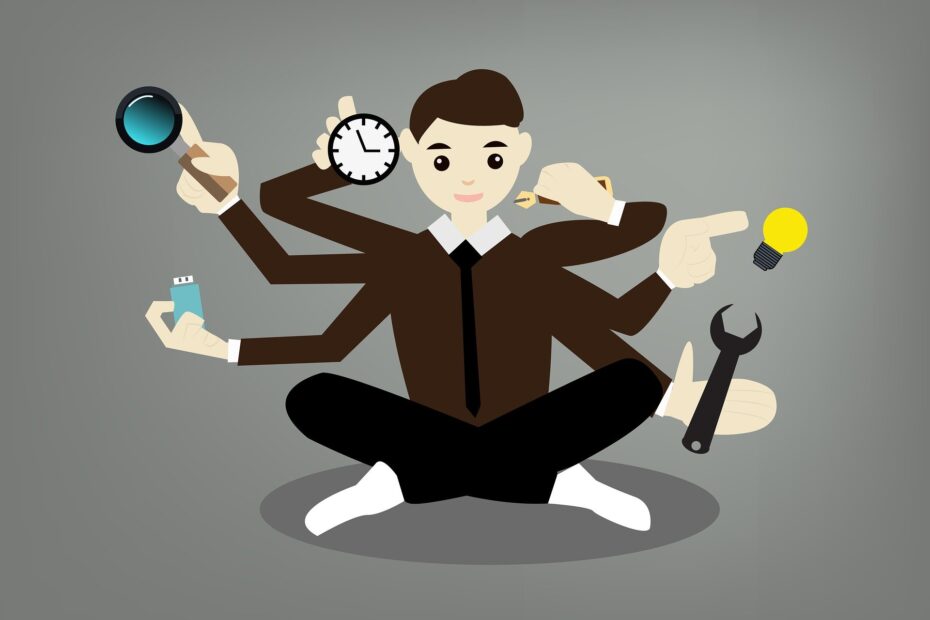 Once upon a time, there lived a donkey in the jungle. During that year the rainfall was scarce and so all the grass in the jungle dried up. So the donkey could not find any food in the jungle. So the donkey went out of the jungle in search of the food. After travelling very far from the jungle, the donkey finally came across a heap of carrots kept in one big farm. The farmer had gone away from the farm, and so it was just the perfect time for the donkey to have a much-awaited meal. But just as the donkey entered the farm, the donkey saw a heap of ripe apples lying at the other end of the farm. When the donkey reached halfway from the carrots, the idea of eating apples first made the donkey turn back and start walking towards the apples. But again, when it reached the halfway, the donkey’s mind was tempted to eat the carrots first. So again the donkey turned back towards the carrots. These back-and-forth exercises continued for another half an hour, and the donkey was still thinking about what should be eaten first. Finally, the donkey came up with a very innovative plan. The donkey goes to the heap of carrots and eats one carrot. Then the donkey started running towards the other end of the mighty farm to eat one apple. After eating the single apple, the donkey again started running back to the other end to eat one more carrot. But by this time the farmer returned to his farm and immediately drove the monkey out of his farm. The poor donkey was forced to leave the farm hungry.

Instead of wasting time running between carrots and apples, the donkey could have easily eaten all the carrots first and then go for eating all the apples or vice versa. But the donkey was dumb enough to not realize this. This might appear idiotic, but many of us are just like the donkey. We want to eat the carrots and apples simultaneously and that is why we often fall into the trap of Multi-Tasking.

Now you might think this is crazy. In today’s fast life, multitasking is unavoidable. In fact, multitasking might be the only way out for you. In today’s fast life all of us do multi-tasking such as opening multiple windows while exploring the internet, talking to our friends & family while driving,  teaching kids while cooking, reading newspapers while watching TV. While multi-tasking may appear as a very efficient way to manage time to us, it is actually not!

American Author and Time Management expert, Dave Crenshaw, has explained through a very simple experiment how multitasking is actually bad for us. This experiment is very simple, interesting, and an eye-opener for the Myth of Multi-tasking. So grab a pen, paper and a watch to begin.

Exercise 1: Do both the tasks sequentially. That is first writing the letters A to J and after completion, write numbers 0 to 9. Count the total time taken by you to write these letters and numbers.

Exercise 2: Now start multitasking by doing partial task1 followed by partial task 2 i.e. write A, 1, B, 2, C, 3, and so on. Count the total time taken to write these two tasks in multitasking mode.

From the above exercise, you realize multitasking is more time consuming and generates higher stress as the brain needs to frequently switch between the two tasks. Often during internet surfing, switching between one window to other leads to a sudden jump in our thought process as we shift our focus from one website to other. Same is true about other forms of multi-tasking.

Dave also explains that multi-tasking decreases the quality of work. This is often clear in the kitchen when two foods are cooked simultaneously. No matter how expert the cook is, the chances of giving quality food are always better when cooked one at a time.

What about relationships? While talking to someone, have you ever got irritated when the other person is constantly looking at the phone? Definitely the other person feels neglected and unattended. In today’s life, a major reason for divorce crisis is the excessive use of mobile phones by the partners.

Multi-Tasking is not avoidable

However, we often find that we cannot avoid multi-tasking on every occasion. For example, if I am working on a computer and doing my important work and if my colleague calls me for some discussion, I can always tell him I am busy with some important thing and I will get back to him soon. If I am working on something important and if my boss calls me, then despite important work, I need to stop my work and attend him on the phone.  Those of you, who understand microprocessors, will know that there are two types of interrupts – maskable and unmaskable.  A colleague’s call is maskable, but boss’s call is unmaskable. But I am not suggesting that we multi-task based on priority.

When to Multi-Task and when not to?

I believe that we must multi-task based on the cognitive load of our mind. Let’s take the example of talking while driving a car. You might be driving your car to your office and talking with your wife (of course via car’s Bluetooth speakers!). Under normal conditions, most of the people easily do so. People find this easy because the cognitive load on your brain is very little. For example, you may drive on a quiet highway with medium traffic and your wife might talk about routine activities. Now let’s take the scenario where the cognitive or computational load on your mind increases because of either or both of the tasks. We are having two tasks on our hand i.e. task 1 is driving and task 2 is talking to the wife. Supposing your wife suddenly tells you something like she has heard that the value of the shares of the company you had invested in has dropped suddenly from 100 Dollars to 60 Dollars. Though your wife has not asked you to compute your loss, yet your brain will immediately start calculating your loss. For example, if you had 700 such shares you will calculate that your net loss is 700 x (100-60) and by the time you find out the answer is $28000 you would have definitely kept your mind busy in this oral calculation. While your mind is busy calculating the loss, if suddenly one event occurs in task 1, then there are chances that you will definitely miss it. For example, if a child suddenly comes out running trying to cross the road, since the resources of your mind were busy calculating your financial loss, you may fail to hit the brake. On the other hand, now let’s take a situation where the cognitive load of task 1 increases. Say you are driving on a peaceful road and then you enter the main city area where it is very congested to drive because of heavy traffic. Your mind will now need to allocate much more resources to remain alert during driving in heavy traffic. At that time, if your wife asks you to bring certain medicines when you return, there are chances that you will forget to buy that medicine because you will not have registered it properly in your brain. Needless to say what will happen if the cognitive load of both tasks increases simultaneously e.g. you are faced with sudden heavy traffic in the city and at that moment your wife informs you about your loss in shares. So as you may see from the above example, multi-tasking is only fine till you don’t have a heavy cognitive load on your brain. In practice, cognitive load while driving is never deterministic and so it’s always better to avoid talking while driving. You can always talk to your wife once you reach your office. But what happens if there is an unmaskable interrupt? For example, you are driving and suddenly your boss calls up for an important meeting. The answer is very simple and has been known to all software programmers. The answer is Prioritize your interrupts. If you have to receive your boss call, then park your car sideways and talk, giving priority to the boss. But what if you are in the middle of heavy traffic and cannot park your car? Then prioritize your driving task first, get out of the traffic, find a suitable place to park your car sideways and then call your boss and explain why you couldn’t receive his phone because of the heavy traffic.

So if multitasking is to be avoided at all means, then it must be clearly an evil thing. Well, the answer is no. There are situations when multi-tasking makes a perfect sense too. For example, programmers often start a time-consuming simulation and then focus on other programs. People often talk to their partners when travelling on a bus or train. Delegates are often busy doing their stuff on their laptops while listening to non-interesting stuff in conferences. So here is my rule of Multi-tasking.

In recapitulation, Multi-tasking is a tricky affair and must be employed only when the cognitive load on our brain is controllable.

1 thought on “The Myth of Multitasking”